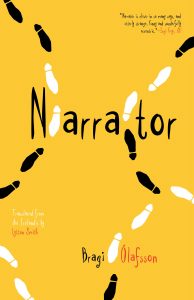 That’s when he notices a man he knows. Or rather knew. Sort of knew. A man who used to go out with a girl G. loved from afar. The only girl he’s ever loved. All his hatred of this man comes rushing back—including his foolish wish that the man would die—and he takes off, following him throughout the streets of Reykjavik. This strange game of cat and mouse takes some dark turns though, evolving into a complex, introspective journey of a man struggling to complete the unfinished narrative of his own life. (Read an Excerpt)

Translated from the Icelandic by Lytton Smith

The Los Angeles Times called Narrator a “book that mines [the] long shadows of failure, anguish and resentment for jet-black comedic effect.”

In a terrific profile that offers larger context for Ólafsson’s body of work (and highlights the difficulties of translating his “uniquely Icelandic” brand of humor), Reykjavik Grapevine calls out its “tamed absurdity,” which gets right at the peculiar psychosis of someone so overblowing their role in a world that, like the ex-boyfriend Aron, doesn’t seem to notice:

“Reality seems to be on unstable footing, even if the characters do their utmost to disregard calamities. In fact, his novels form a unified whole; a Vonnegut-esque universe within a setting that feels mundane and familiar, yet slightly at odds with our own world.”

Publishers Weekly declares, “This amusing story will delight fans of narrators who humorously and unintentionally implicate themselves in their own derision.” Ólafsson’s protagonists have been compared to Kafka’s Gregor Samsa and A Confederacy of Dunces’ Ignatius J. Reilly, and by me, just now, to The Moviegoer’s Binx Bolling, who also finds more love in narrative than real life and similarly torpedoes human connection.